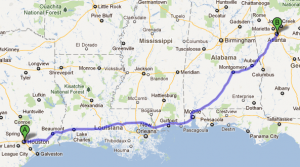 Auto Transport Houston to the Atlanta area is as simple as it gets. Most of the year the price will be around 750.00$. Many carriers are looking for loads going this route so you might be better of with a broker. On the other hand, the broker might not pass the savings on to you so use this site to call and research both. Pickup for this route should be the day they say because your vehicle is needed so badly. Transport should be delivered within 2 or 3 days. We have heard that the DOT along this route can give the drivers some delays so make sure the company you choose has everything in order.

This very popular route for auto shipping usually stays in the price range of 750-850$. It sometimes will jump up or down depending on which direction has more vehicles heading its way.

Please take into consideration that fuel, time frame, size of the vehicle, etc.. will make every shipment different therefore cost and time frame might change. Thanks, Auto Shipping HUB

The information below is found here. We are trying to add more relitiave content, if you need to check flights the info below should help you. Thanks for looking

Atlanta is the capital, most populous, and primate city of the U.S. state of Georgia. With an estimated 2018 population of 498,044, it is also the 37th most populous city in the United States. The city serves as the cultural and economic center of the Atlanta metropolitan area, home to 5.9 million people and the ninth-largest metropolitan area in the nation. Atlanta is the seat of Fulton County, the most populous county in Georgia. Portions of the city extend eastward into neighboring DeKalb County. The city is situated among the foothills of the Appalachian Mountains and has one of the highest elevations among major cities east of the Mississippi River. – Wikipedia

Laurraine Huffman
16:43 16 Oct 22
Excellent. Timely. Hands down, great service from Tony and the drivers they used to exchange our vehicles from one city... to the other.read more

Bri J
00:32 23 Mar 22
Tony is prompt he answered me quickly with a quote and after I told him my budget he came back to me with another quote... in my budget the next morning. I needed my car shipped asap MD-CA. Car was picked up 3/18 and delivered to me by 3/21. Insane. Really appreciate this service. And the driver Mike was awesome too. Great communication and drop off was seamless. THANKS TONY!read more

Nathan Johnson
12:54 27 Oct 21
Tony was a pleasure to work with! Very prompt with communication and eager to help. This was my first time shipping a... car and Tony walked me through the process and made me feel confident that the car will be in good hands. Everything went well and my car looked great. I will definitely use Auto Shipping Hub again, and I highly recommend them.read more

Felicia Ortiz
23:53 06 Oct 21
We had another transport company back out on us 2 days before our move across state. They were supposed to ship 2 cars... for us. I called Tony and he was able to save us a bunch of heartache!!!! Our cars will be delivered and we will be moving as scheduled! Thank You So Much for A Job Well Done!!!!!!!read more

Moon Moon
23:07 11 Jul 21
I can't say enough about Tony, his communication with me was great. He shipped three of my vehicles from Orlando, FL... to Georgia and I was very impressed with this company. His delivery person he used was professional and just awesome. Reasonable prices as well. I would definitely use Tony in the future if needed. I recommended him to my realtor and moving company in Orlando, FL. as well. Tony will not let you down. He is very dependable and is excellent in what he does Very impressed with this company. Thank you again Tony.read more

Larayia Deary
16:13 20 Jun 19
Tony was super professional and worked with finding a driver at the last minute for me. I was super stressed out... because everyone else was saying it was impossible to get my vehicle shipped out that fast. Tony was a blessing to me. I would definitely recommend his services to everyone. He is great.read more

anita behari
17:54 03 May 19
I worked with Tony to have my vehicle shipped from Florida to California. It was my first time shipping a car and I was... nervous about the process. Tony was great, super prompt with email replies, very understanding, and he was able to answer all of my questions.read more

Adam Adams
20:02 24 Apr 18
I have two project vehicles. Neither one of which will run on its own. Back in March, Tony was able to arrange for a... local driver with a trailer to haul my babies 75 miles away to my new residence and was able to get it arranged within a few hours. The driver, who was a contract driver, was great and helpful and couldn't have done it without him.Thanksread more

derek richard
20:33 17 Jan 18
I highly recommend this company. They have moved 2 cars for me & both were on schedule, fairly priced and their... communication was excellent. They had short notice of my shipping need for 1 car- it was bought at an auction & I was only allowed 2 days storage before I being charged a daily storage fee. Tony got the car picked up within 48 hours of my call to him. These are the guys to call if you need a vehicle shipped ! Thx again Tony.read more